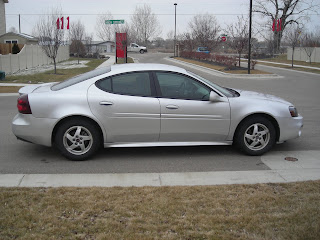 So after juggling one car between the two of us, we finally sold the broken down saturn! It wasn't worth much, but at least we got it off our hands. And we got a new one! Well not new, new- but new to us and that's what counts! YAY!! 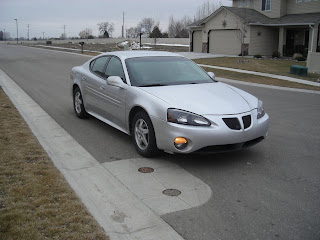 THE DRAMA OF THE NEW CAR....
Ok, so this was a car that we found off of craigslist, that was a killer of a deal... but it was in utah. So we decided it was worth it to drive 5 hours to get the car! When we drove down on Saturday morning the weather and roads were great! We got to Utah and picked up the car, and then spent the night with Jason's Aunt in American Fork. Sunday morning we woke up to typical Utah winter weather... snowing like crazy!!! We went to sacrament and then I had to drive back to Boise that night because I had to work on Monday. Jason had planned to stay in Utah one more night to spend some time with his brother and then was going to drive the new car home on Monday.
ANYWAYS, I left Utah and the roads weren't too bad they were mostly just wet from the snow. I was able to go 75 mph for about 2 hours until I started to hit some snowy roads, so ofcourse I slowed down- little did I know that all the fun was just about to begin! I started seeing all sorts of cars that had spun or slid off the road from the snow and ice. I stopped for gas and when I got back on the freeway the roads were even worse. Then, about 30 miles later I came upon this truck that had slid off the road and rolled a couple times. I could tell that it had just happened, because there was no police/ambulance and people were stopping their cars to go help. This was a full sized truck that was on it's side, so me being a nurse- felt compelled to stop and see if I could help. The other people that had stopped, mostly just stopped to look because no one was really doing anything. I ran up and told them that I was a nurse- so they helped me climb into the cab of the truck (remember this truck was on it's side). There was only one man inside, about 60 yrs old who, from what I could tell, had a broken wrist, probably a broken rib, and was bleeding from his head. Long story short- I stayed with him inside the truck until the paramedics arrived.
THEN when I got back in my car and back onto the horrible roads, my car started driving really funny. I was only going 20 mph and it was a flat road, but I was fish-tailing like crazy! So I, myself, ended up sliding off the roads just like everyone else! AH! Luckily, it was a slow semi-controlled slide off. But it totally shook me up! Needless to say, I had started fish tailing because I had a flat tire! I figured I must have ran over some glass when I stopped to help. The place where I had gone off the road was right next to an on-ramp and I could see a Chevron, a Shell, and a Walmart down the road. So I went in reverse up the on-ramp all the way to the Chevron and was hoping to fill the tire up with some air, and then go to Walmart and get it fixed. Well ofcouse the Chevron "Free Air" was out of service! So I slowly made my way over to the Walmart on the flat tire and they took it off and showed me the HUGE hole in it. So I got two new tires and was on my way again. The roads started to get better and better so the cars started to go faster and faster, but I was still chicken to go fast from all the drama in the day. It was a good thing though because then all the sudden with no warning the roads were covered in snow and ice. I was able to maintain control, but I watched in my rear view mirror as the car behind me hit the bad roads and spun out of controll and off the roads. I watched to make sure they didn't hit anything or flip over (they didn't) and kept going.
LONG story short, I passed about 15 cars total that had gone off the road and it took me NINE hours to get home! It was the most intense nine hours of my life and I had the whitest nuckles from the drive! I was very blessed that nothing worse happened and I made it home safely. And the whole point of it all was to go to work on Monday... which you'll be happy to know I made it to!
SORRY for the long story, but there you have it! *sigh*
Posted by Brook and Jason :) at 6:40 PM 8 comments:

For Jason's Birthday last month, I suprised him with tickets to go see Jerry Seinfeld! I bought these tickets in Novemeber and it was the hardest thing to keep it a secret for so long! But it was definately worth it- I gave the tickets to Jason a week before the show, so the anticipation could build up all week long. It was nice to finally be able to talk about it too! The show was great, and Jerry was a very clean comedian too! 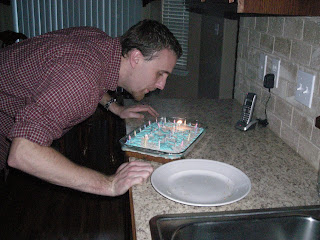