So this year for my birthday, I wanted to go camping a break in our new tent! So we planned for this mini-vacation for about a month, drove around for about 5 hours, and we ended up in the Boise National Forest! There were SOOOOO many pictures, I tried to narrow it down but there's still quite a few! So enjoy, and be jealous that you didn't get to come! :) 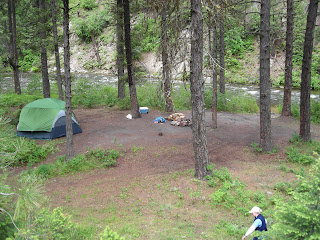 This is our little camp ground- right next to the Payette River! It was so beautiful! 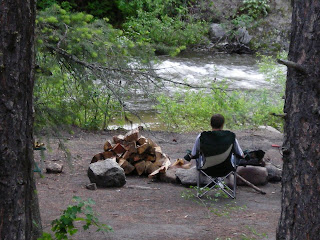 Jason, relaxing by the soon to be fire! 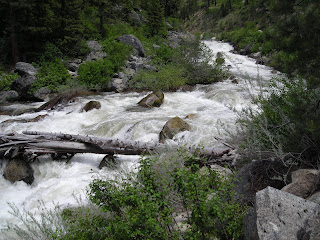 We took a TON of scenery photos, everywhere we turned there was another beautiful shot! This one is my favorite! 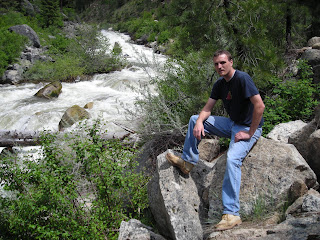 JASON- KING OF THE ROCK! 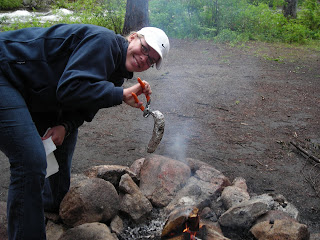 This was my birthday banana! You slice the banana down the middle and take a long chunk out... then you fill the hole with chocolate chips and marshmellows! Wrap it up in tinfoil and throw it in the fire for 3-5 minutes. DELICIOUS!!! 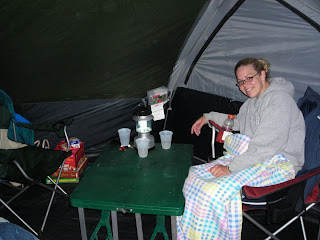 Our tent totally passed the test... I was so roomy that it fit our queen sized, double decker, air-mattress, AND all of our stuff, AND these two chairs AND a table! PLUS there was plenty of room to still walk around! Amazing! I know! 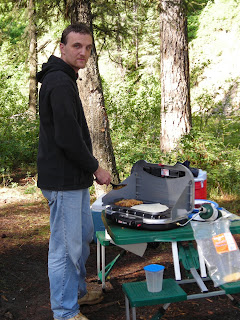 Jason made the MOST delicious breakfast burritos! They were so filling that we skipped lunch and didn't even know it! Yum! Yum! 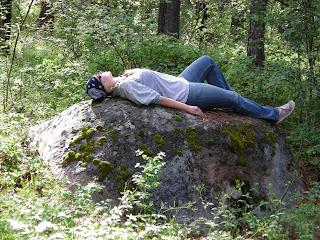 I have decided that this is where my final resting place will be. All alone, in the middle of an awesome forest... on a rock. :) 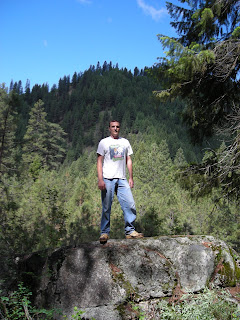 Jason found another rock to be KING of! 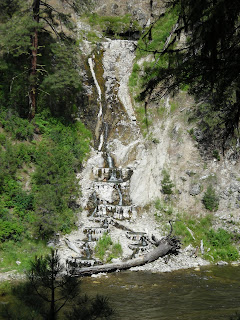 This was a neat hot spring coming out of the mountain into several different pools that someone had built up! We would have totally gone in it if you didn't have to cross the freezing river to get to them. But we did see other people in them, and pretended it was us! 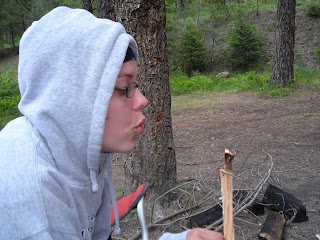 Blowing out my birthday candle... I mean birthday stick... Don't worry- I still made a wish! 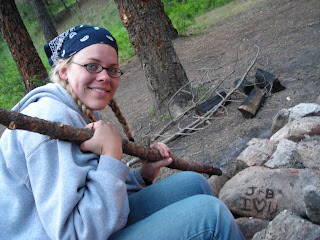 Proving my love to Jason, by writing it in ashes on a rock! Now THAT is love baby!
Posted by Brook and Jason :) at 12:58 PM 3 comments:

ODE TO CHELSEA... WOMAN OF THE YEAR!


Jason and I made a trip down to Utah to spend some quality time with my sister Chelsea. She pretty much rocks, so we went down to see what we could learn from her awesomeness.


Then on Sunday, Teneill and Corban came over for an incredibly delicious dinner that Chelsea risked her life to make (seriously we had BBQ chicken and the wasps had made a nest inside the grill! I know, right? AWESOMENESS!) Here are some pics from the mini-trip... 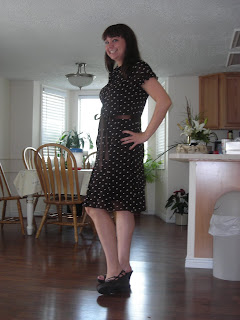 Cheslea... in all her GLORY!
(let me remind you - this pic was taken AFTER her battle with the wasps! How does she do it? GRACE! CLASS! and a little bit of SASS!) 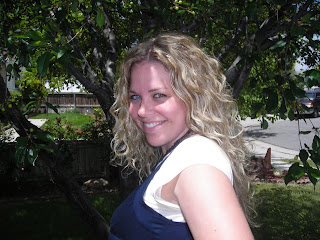 I can only pray that I can become 1/2 the woman she is one day. 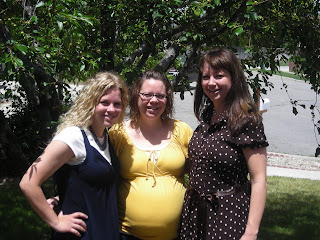 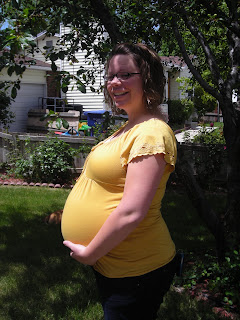 GUESS WHAT?? Teneill's pregnant!
(Isn't she a cute prego?!) 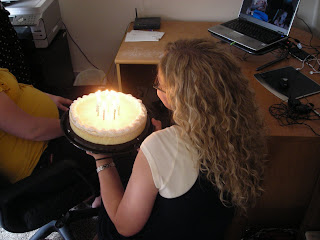 And they remembered my day of birth! So tender- I got to celebrate all week long! and this is what started it all! Thanks guys!
Posted by Brook and Jason :) at 8:55 PM 1 comment:

Let me explain myself...

I feel the need to explain all these late posts...

Ok back to the point of this post- so the reason for all my late posts is because when my year is up and it's time to make a book again, I decided it is SOOOO much easier to just copy and paste from my blog than so try and remember the whole last year and all of the things we did.

So there you have it. I will probably ALWAYS have late posts because I have a hard time sitting down and updating for just one event. (as you can see)

And no- this post will not be copied and pasted into my book :) incase you were wondering!
(and who knows... maybe i'll even start copying and pasting the comments that are left! but not very likely...)
Posted by Brook and Jason :) at 8:38 PM 1 comment:

May 16th- May 19th
Just another late post...
I took a little trip to Pheonix, Arizona to go visit my sister Jill and her cute little family. I had the best time! Her kids are so entertaining, I was happy just sitting there observing! We did lots of fun things and the time passed by WAY too fast! But that's okay because, that means that now it's time for her to come visit me! (HINT, HINT!!) Here are some pics of the trip..... 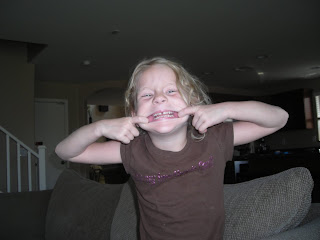 Crazy, but cute, little Abby... you gotta love her! 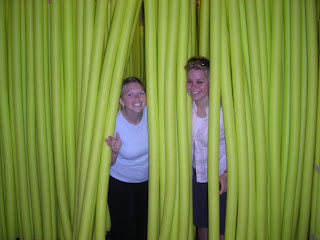 We went to the children's museum one day- but I think the adults had just as much fun! This is Jill and I in the swimming-noodle forest. (Or at least that's what I call it!) They had a million of these swimming-noodles hanging from the ceiling that you could walk/run through! It was so fun.. but also kinda dangerous for kids- it's hard to watch where you're going! Let's just say I tried not to plow too many kids over :) 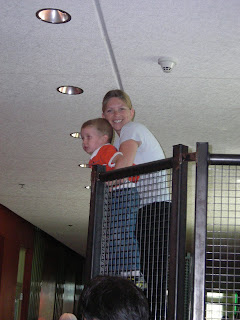 Jill and Parker
(Jill is the cutest mom ever by the way!) 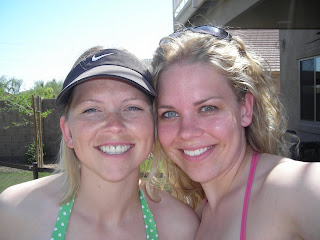 Soakin up some arizona heat, by the pool. ahhhh... 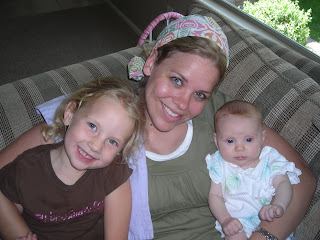 Abby and Mia! You hav no idea how many pictures it took to get one of Abby actually smiling and not making a funny face! (see above) She's quite the entertainer! 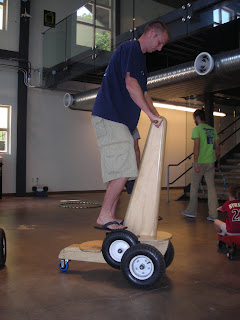 Jon at the Children's Museum... These little mobile thingy's are alot harder than they look! You're suppsed to run on those top wheels and it turns the bottom wheels, and thus moves you forward. Kind complicated to explain, but i tried!

After much contemplation... I went blonde! Yea, yea I've always been blonde, but I threw some darker colors in there for the winter and now I'm back to blonde and I'm loving every minute of it! I'm pretty sure I'll be staying this way for a LOOOONNG time! Here's a pic of my new do! 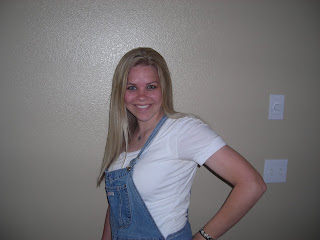 (And yes I know the 80's are over, but I will always wear overall's! No matter how much my husband makes fun of me!)

Yes I know I'm a little slow getting these posts out- but better late than never!

So my friend Melissa and I trained and ran the Susan G. Komen, Race for the Cure. It was a 5K, which is just right for me :) It was so, so, so much fun! There were 13,000 participants, and when the starting gun went off it was so crowded that we seriously couldn't even start to run till like 1/4 mile into the race! Not only that, but almost half way through it- this guy in front of me dropped to the ground and had a seizure! (yeah he was like 19-20 years old too!) My nurse instincts made me stop and help, along with an ER doctor that was running the race and some other people. Eventually there was so many people to help, they really didn't need me so I just kept on running :) I didn't want to mess up my time too bad! So much for setting a record, maybe next time! The breast cancer awareness and theme was so overwhelming- everyone who was a breast cancer fighter/survivor got a pink t-shirt, and a medal when they crossed the finish line. There were lots of people who had made shirts that said "In memory of..." or "In celebration of..." and there were WAY more pink shirts than I would have ever imagined! You just never know who is struggling with something like that, but when they stand out and you all are able to fight together to find a cure, you just feel... united. 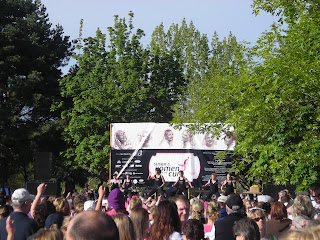 They did group Jazzercise to warm everyone up before the race, it was HILARIOUS!! But so much fun at the same time! 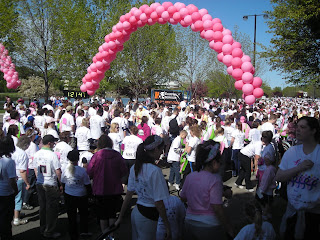 The HUGE crowd at the starting line- see what I mean about the not being able to run part? Those people go on forever! 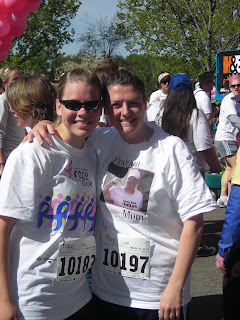 Melissa and I after we crossed the finish line! She was running to support her mother who has breast cancer, and she made a shirt with her mom's picture and it says "I love you mom!" on it! She rocks.
Posted by Brook and Jason :) at 9:15 PM No comments:

This year our Stake has put together a Community Garden. They had a couple acres of land that wasn't being used, and they had a couple of acres donated for use. This project is HUGE. Jason and I have been put in charge of a small square foot garden to demonstrate how a garden can be managed at your own home in a smaller space. It has been alot of hard work, but has been a fun project to do together. This is my first attempt at a garden, but Jason (growing up in Idaho and all) is practically a pro! It's been fun to see the community come together and work on this garden- everyone is supposed to keep track of their own hours (using the honesty system ofcourse) and then when the fruits of our labor (or vegetables rather) start to sprout they will distribute the food according to the work you put into it. In other words, free food for your work! Being in Idaho, it has been easy to get tractors, compost, and even seeds donated from farming companies- the generosity of people has been so incredible! I'm pretty sure a project like this would never happen in Cincy... 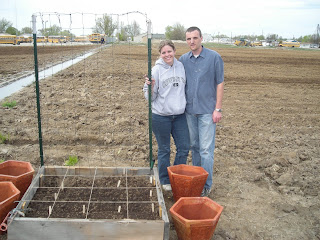 Picture taken: 4/27... There has been MUCH growth since then! I'll have to take more pics!