ODE TO JASON: HUSBAND OF THE YEAR!!! 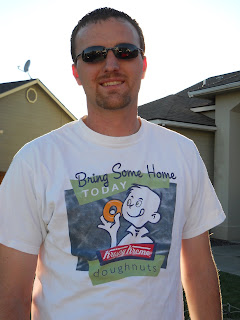 "An ode is typically a lyrical verse written in praise of, or dedicated to someone or something which captures the poet's interest or serves as an inspiration" -Wikipedia

I have always loved Jason. Well, maybe not when I first met him (if you know the story...) but you get the idea. :) I have never met someone who makes me so incredibly happy, and has the ability to make my life feel so fulfilled. Sure, our marriage is not by any means perfect- in fact I think this past year has been the most challenging one yet! But Jason knows the secret to my never ending happiness- A secret that not even I know. He seems to use this secret weapon when I least expect it- and then I have to be happy even if I don't want to!
The inspiration for this post came to me last week. Jason was going out of town on Thursday to his parents house in Blackfoot. We are going to be apart for a whole week, until I join him over there tomorrow for Thanksgiving. Before he left, I asked him to write me a little love note so I would have something to read when I came home to an empty house. No, we're not newly weds. And Yes, we've been apart for much longer than a week before. This was not my first time around the "lonely" block. Nevertheless, Jason agreed to my simple request and said he would do it. But when I came home, there was much much more than just a love note...
If you know Jason, he's not so much the mushy love letter type of guy- but rather he shows his love by his actions. When I walked in the house I was greeted by a love letter, as promised, but I was also greeted by countless actions of love from my husband. The first thing I noticed was a little post-it note on a magazine I was reading. Then I saw one on my computer. Another one in the bathroom, on my pillow, and in the fridge. They were all little love notes, reminding me of my incredible husband.
When I found the one in the fridge it said "I didn't want you to eat only cereal while I was gone. Love, Jason" It was sitting on top of a chicken & stuffing casserole he had made for me. Then on the next shelf down there were homemade chicken enchiladas. And on the last shelf was a homemade chicken pot pie. This food was going to last me the whole week, and then some! Jason used to work for a catering company- so he knows his foods and best of all, he knows how to cook them! I have been eating these delicious meals for dinner each night, and even taking them to work with me for lunch! I do love a good bowl of cereal, and probably would have eaten a fair share of it while he was gone- but I am happy to announce that I have only had two bowls, and they were actually for breakfast!!
Jason must have been incredibly busy before he left, because he also painted the bathroom ceiling!! Our walls and ceilings are all the same color. Tan. I've never had a problem with it because our ceilings are 10 feet high. But our guest bedroom and bathroom are the normal 7/8 feet, so the tan color makes them feel a little small. A couple of months ago we painted the ceiling in the bedroom and have taked about doing the bathroom but never got around to it! Well sneeky little Jason got around to it right before he left, and it looks AWESOME!
So ODE TO JASON: HUSBAND OF THE YEAR, for capturing my interest, and being my inspiration. I love you, appriciate you, and am so lucky to have you.
Here's to living happily-ever-after!!
Posted by Brook and Jason :) at 4:02 PM 3 comments: